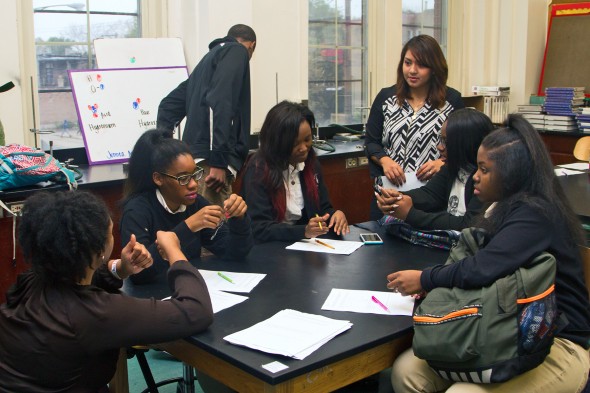 A College of Education program places teachers in 30 schools in predominately African-American and Latino neighborhoods on the south and west sides of Chicago. (Photo: Vibhu S. Rangavasan)

As the students walked into the classroom of Tiffany Childress Price and Deysi Emeterio at North Lawndale College Prep High School, they were quickly told to get into groups and begin making a list of metals found in the room.

Students in the chemistry class began jotting down items — everything from paper clips to Bunsen burners and iPhones to jewelry — and it quickly became clear to them that metals of various forms were present in every facet of their lives.

The assignment was intended to show how precious metals are present in students’ lives and how they become sought after for their unique properties and beauty. To reinforce their lesson, students viewed a documentary detailing how “bling,” or precious metals, helped spur civil wars in Africa.

“I didn’t know in Africa there are wars over bling and they trade bling for weapons and a lot of stuff,” said 16-year-old Joshua Sanders. “We talk about how it is in the world and what’s going on with a lot of youths dying.” 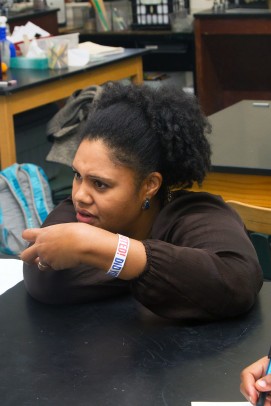 “I never had a woman who looked like me in the sciences,” Tiffany Childress Price, teacher at North Lawndale College Prep High School, says of her own past teachers. (Photo: Vibhu S. Rangavasan)

Childress Price and Emeterio said they strive to make science relevant to their students as part of their role in the UIC program, Science Education for Excellence and Equity in Chicago (SEEEC). The initiative aims to integrate standards-based and social-justice oriented teaching and learning, and increase the number of science teachers and teacher leaders of color. In its second year, the program is funded by a six-year, $3 million grant through the National Science Foundation’s Noyce Scholars program.

The funding provides stipends and tuition waivers for 30 Teaching Fellows like Emeterio to help them earn licensure to become high school science teachers and support them in their first four years of teaching. Chicago Public Schools is also involved in the project. Chandra James, director of science for CPS, is a co-principal investigator, providing leadership opportunities to master teaching fellows.

According to Maria Varelas, professor of science education and principal investigator of the project, the aim is to develop science teachers and teacher leaders who provide strong role models for the many students of color in urban schools. The program is designed to give students of color a strong background in science that they can use in their communities, even if they choose not to go into science fields.

“Whatever they choose to be in their lives, we think science and understanding science from a very community-based approach will be extremely helpful for them,” Varelas said.

Childress Price, who is African-American and in her tenth year teaching, said she only had one instructor in her science classes who was African-American, but he was a male. Childress Price, who attended Ohio State University as an undergrad and received her master’s at Wheaton College, said there is a need for women of color to be science teachers.

“I never had a woman who looked like me in the sciences,” Childress Price said. “I always felt like the other, and there were times I felt I didn’t belong.”

In addition to North Lawndale High School, the master’s program places the teachers in about 30 schools in predominantly African-American and Latino neighborhoods on the South and West sides, said Danny Morales-Doyle, assistant professor of science education and SEEEC project director.

At Back of the Yards College Prep High School, Diana Bonilla was teaching her honors biology class as students speaking English and Spanish filled the room. A teaching fellow, Bonilla received her master’s degree in science education from UIC in May. She is beginning her four-year commitment to Chicago Public Schools.

Bonilla’s class had recently finished a bio-chemistry unit where they focused on food access and nutrition around the world. Bonilla tried to make it relevant to the students by focusing on food deserts in Chicago.

“A lot of them were able to see that in lower income neighborhoods, there’s a lot of fast food restaurants as opposed to there being a Whole Foods,” Bonilla said.

As a first-generation Mexican-American, Bonilla hopes to serve as a role model to her students. Bonilla grew up in Northlake and earned her undergraduate degree at Illinois Wesleyan University, where she did not have science teachers of color.

She gives Omar Espinosa hope that he can be the first person to attend college in his family. He hopes to study computer science.

“At first I thought, ‘I don’t know if I’ll be good enough’ but when I talked to Ms. Bonilla she told me how she always wanted to be a biology teacher,” said Espinosa, 16. “I kept looking at her and I was like, if she can do it I can probably do it, too.”