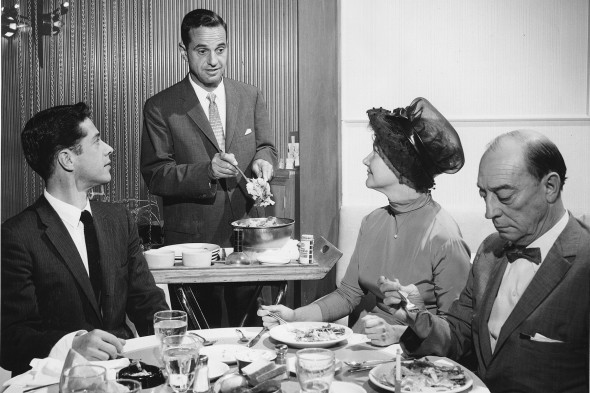 Don Roth prepares the “spinning salad bowl” in a promotional photograph. Actor Buster Keaton is seated at the right.

Before Chicago had the Frontera Grill, Lettuce Entertain You, and Alinea restaurants, it had the Blackhawk Restaurant, which broadcast big band music live across the United States on WGN Radio.

When television moved into the homes of Americans in the early 1950s, restaurateur Don Roth decided to “make food the show” and used spinning salad bowls and rolling roast beef carts as a new way to provide tableside entertainment for his guests. He also arranged for the Blackhawk’s new signature style of dining served to transcontinental, first-class passengers on American Airlines.

From Dec. 27, 1920, when it first opened its doors at 129 N. Wabash Ave. in the Loop until New Year’s Eve in 2009 when Roth’s wife Ann closed the last restaurant in Wheeling, the Roth Restaurants helped usher in many firsts for Chicago’s dining and entertainment scene.

The nine-decade history of the Roth family restaurant business and its visionary father and son owners, Otto and Don Roth, are the subject of an exhibit at the University of Illinois at Chicago’s Richard J. Daley Library, which will open on May 10 and continue until the end of 2017.

The family of Don Roth, who died in 2003, permanently donated 60 linear feet of memorabilia including signed contracts by big band leaders and other celebrities, photos, scrapbooks, recipes and decades of menus to the Special Collections and University Archives department of the library.

The collection will be available to historians and other members of the public who may want to view them as examples of how the family-owned business not only adapted to but also helped influence 20th-century dining trends and business practices, said Peggy Glowacki, a special collections’ librarian and instructor.

“It offers a great perspective on families, their social lives, how we entertain ourselves and what we expect from public entertainment and from the simple act of eating dinner,” says Glowacki. “The Blackhawk always sought to provide more than a meal.”

Otto Roth, who had classical musicians play unobtrusively from a balcony as diners quietly ate below, opened the Blackhawk in 1920. However, having opened the same year prohibition became law and it became illegal to sell and consume alcohol, Roth knew he desperately needed to attract patrons in order for his restaurant to survive. 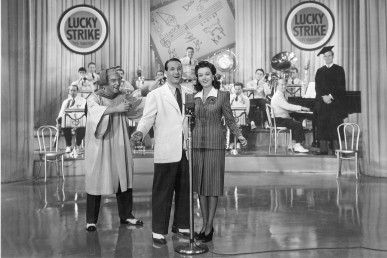 Performers at the Blackhawk Restaurant.

In 1926, Roth discarded classical music, installed a stage and dance floor and began nationally broadcasting “Live! From the Blackhawk!” over WGN Radio. The Blackhawk featured dance orchestras and stars including Kay Kyser, Chico Marx, Louis Prima, Mel Tormé, Ozzie Nelson and Doris Day who made her first appearance with Bob Crosby’s band in 1940. A telegraph machine in the restaurant even took requests from listeners.

According to newspaper clippings from the era included in the collection, Otto Roth quickly developed into a media-savvy promoter and trendsetter, according to Glowacki. He recognized that the Loop was full of new potential customers. Roth’s ads invited women shoppers to stop in for a respectable and “dainty lunch,” executives to dine with clients, and sweltering Chicagoans to enjoy the Blackhawk’s “naturally cooled air.”

When Roth died suddenly in 1944 his son, Don, took over. The younger Roth had previously served as a booking agent on the west coast and had experience supplying food to soldiers while in the military during World War II. After he took the reins of the restaurant, he decided it was time for a change and took down the stage, did away with live music and decided to focus on the food.

He also was ready to learn from what others were doing. He noticed that Lawry’s in Beverly Hills, Calif., was serving green salads made tableside by waiters using a spinning salad bowl and serving prime rib tableside from rolling grill carts. He followed by making them signatures of Don Roth’s Blackhawk Restaurant in Chicago.

“Don Roth’s slogan becomes, ‘The Food’s the Show,’ and the focus turns to food as entertainment,” said Glowacki. “He has a keen eye for new ideas and is skilled at adapting them for his customers.”

In 1969, Roth followed people escaping the social unrest of urban areas to the suburbs, opening Don Roth’s Blackhawk in Wheeling. After opening several shorter-lived spots along Michigan Avenue, the original Wabash Avenue restaurant closed in 1984 while the Wheeling restaurant stayed open for six years after Roth’s death in 2003.

Ann Roth, who is 94, said her husband Don and his father Otto were truly trendsetters and recalled hearing WGN’s broadcast from the Blackhawk Restaurant when she was growing up in the southern United States.

Roth was the first to have art exhibits in a restaurant, the first to offer a salad bar in Chicago, and one of the first to have black and white wait staff working side by side, said his wife. She also said her husband was a person who kept his business “to a high standard” and was known as a strict, but fair boss who was among the first to hire young people as waiters to give them a chance and to tap into their “younger” ideas.

After the assassinations of Martin Luther King Jr. and Bobby Kennedy in 1968, the vitality of Chicago’s Loop was in doubt because fewer people were willing to stay downtown after work.

It was then the Blackhawk became the first restaurant to offer complimentary shuttle bus service from the restaurant to the Lyric Opera House and Chicago Symphony Center for diners in the city. Because the Blackhawk’s regular menu offered traditional fare, Roth also invited famous chefs from other countries as guests to work in his kitchen and come up with unique menus. He wrote travel stories centered on food for the Chicago Tribune, she said. In 1980, her husband was one of the originators of the Taste of Chicago food festival, which was set up along North Michigan Ave. during its first year.

“He was a very imaginative person, he was extremely creative,” said Ann Roth. “My husband loved the business and he was a very, very charismatic person.”

Roth said she chose UIC to be the recipient of her husband’s and the restaurant’s archives because she knew the library had the space for “this volume of work” and would provide a place for scholars and others to study them. She said her husband, who was a graduate of the University of Illinois at Urbana-Champaign, loved his alma mater.

“I knew that Don would have loved having the University of Illinois be the recipient,” she said. “He loved Illinois.”