Today’s rechargeable lithium-ion batteries are good, but they could be much better in the future. 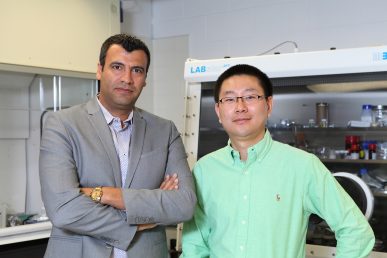 That’s what University of Illinois at Chicago and Argonne National Laboratory researchers have concluded, following extensive studies using real-time transmission electron microscopy, or TEM. The technique, they report in Nature Communications, is the most effective way to understand the electrochemical reactions of lithium-ion batteries and to learn how the batteries can be modified to become safer, stronger, longer lasting and cheaper.

“Despite widespread use, rechargeable ion batteries face various materials and interfacial challenges that exclude them from high power and high-performance applications,” says Reza Shahbazian-Yassar, associate professor of mechanical and industrial engineering and one of the co-authors on the paper that includes Khalil Amine and Jun Lu of Argonne.

Lithium-ion batteries are commonly used in home and portable electronics, and in some motor vehicles. They function by the movement of lithium ions from the negative electrode to the positive electrode during discharge and back when charging. And while the market is projected to reach more than $77 billion by 2024, according to Transparency Market Research, researchers say that several questions need to be addressed before better batteries can be produced.

“There are many scientific challenges, and we want to learn what causes the batteries to fade during cycling; why lower temperatures cause a poor power supply; why it may overheat and explode; and why the batteries become unstable if overcharged,” Shahbazian-Yassar said.

“Sometimes good materials are made but they are not safe,” he said. “Sometimes they are made safe but they don’t deliver enough energy to work. We want to find a happy medium.”

For example, Shahbazian-Yassar says the lithium-ion batteries that are used today fall short of reaching the high-energy density or longevity required to power electric vehicles while still matching the performance of vehicles powered by internal combustion engines. Therefore, new combinations of electrochemicals consisting of lithium and oxygen, and lithium and silicon, are being examined because of their ability to hold and generate higher densities of energy.

Shahbazian-Yassar and Yifei Yuan, a postdoctoral researcher working jointly at UIC and Argonne and the lead author on the study, used real-time TEM to study the batteries because the technique allows researchers to modify specimens — either through heating, straining or other uncontrolled processes — in a deliberate way.

There are numerous advantages to conducting research in situ, or in real time, Shahbazian-Yassar said. A single in situ experiment provides a continuous view of a process and its changes, instead of employing many samples; and specific and detailed movements can be measured.

In addition to lithium, a light but highly reactive material with limited supply in the earth, researchers are interested in exploring alternative charge carriers such as sodium, because of its rich storage in the earth and relatively light atomic weight, and multivalent ions with high-energy density, such as magnesium, calcium and aluminum.

“The components of batteries must be changed and new designs and materials must be used that cost less,” Shahbazian-Yassar said. “The batteries need to deliver more energy and better performance, providing double or triple the amount of energy density they now provide. Overall, if you look at the last 10 years, the battery cost is reducing, but it’s still not in the range we are hoping for.

“There needs to be high standards when developing the next generation of lithium-ion batteries, and we’re working towards that,” he said.

The work was funded by the U.S. Department of Energy under contract DE-AC0206CH11357 with support from the Vehicle Technologies Office and the Department of Energy’s Office of Energy Efficiency and Renewable Energy. Financial support was also provided from the National Science Foundation, award number DMR-1620901.