People with chronic kidney disease may be especially vulnerable to the deleterious effects of poor sleep, according to a new paper published in the Journal of the American Society of Nephrology. 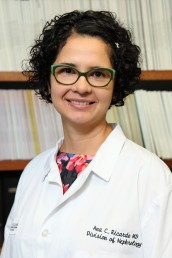 Dr. Ana Ricardo, associate professor of medicine in the University of Illinois at Chicago College of Medicine. Photo: Jenny Fontaine.

Poor sleep is known to be associated with worse cardiac function, higher levels of inflammation, insulin resistance and poor hormonal regulation of the appetite. Previous studies have suggested that poor sleep is common among patients with chronic kidney disease, but few studies have looked at the effects of sleep on the progression of the disease.

A research study led by Dr. Ana Ricardo, associate professor of medicine in the University of Illinois at Chicago College of Medicine, and Kristen Knutson, associate professor of neurology and preventive medicine at Northwestern University, examined the association between sleep duration and quality on progression of chronic kidney disease among 431 patients with chronic kidney disease.

Participants had a mean age of 60-years-old. Forty-eight percent were women, and half of the participants also had diabetes. Participants were asked to wear an accelerometer on their wrists for five to seven days. The devices measure motion and provide information on duration of sleep as well as periods of wakefulness. Patients also kept a sleep journal where they logged hours slept. Participants were followed up for five years.

“We observed that sleep is seriously impaired in these patients with chronic kidney disease,” said Ricardo.

The average hours of sleep among the participants was 6.5 hours per night. On average, participants spent 21 percent of the time in bed in wakeful periods. Interrupted sleep, also known as “sleep fragmentation,” was associated with a slightly elevated risk of developing kidney failure.

Over the five-year follow-up, 70 participants developed kidney failure, and 48 participants died. Higher sleep fragmentation and shorter sleep duration were each associated with steeper declines in kidney function over time. “Each hour less of sleep duration increases the risk for deterioration of kidney function over time,” Ricardo said. Additionally, self-reported daytime sleepiness was associated with an 11 percent increased risk of death from any cause.

“If we find that sleep apnea is a main driver of poor sleep among patients with chronic kidney disease, then perhaps ensuring that it is treated can help improve overall outcomes,” she said.