Women who have had two or more unexplained miscarriages can benefit from natural progesterone treatment before pregnancy, a new a study shows.

Progesterone has been used for infertility for more than 50 years because it helps stabilize the endometrium, the inner lining of the uterus. But the hormone’s use has not been well-studied in women who become pregnant easily but have difficulty maintaining pregnancy. 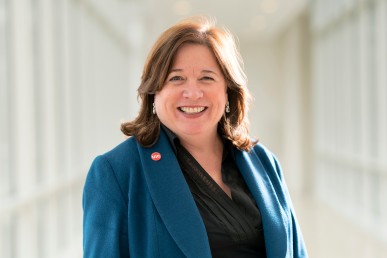 “Recurrent pregnancy loss is a heartbreaking challenge for as many as one in 20 women,” Stephenson said, “although it is not often openly discussed.”

“And while we know a lot about sporadic miscarriage, which is a natural mechanism of the body when there is a chromosome error at conception, we do not know nearly enough about unexplained recurrent pregnancy loss,” said Stephenson, who is the Dr. Theresa S. Falcon-Cullinan Professor of Obstetrics and Gynecology at the University of Illinois at Chicago College of Medicine.

Stephenson and her colleagues see more than 200 women each year who suffer from recurrent pregnancy loss, making UI Health one of the largest sub-specialty centers in the U.S. for helping women struggling to maintain pregnancy.

Unlike previous studies, the new, prospective study of progesterone supplementation looked at a large and specific group of patients—116 women who had a history of recurrent pregnancy loss.

Recent evidence has suggested that endometrial glands may play a larger role in early pregnancy than previously thought, so Stephenson worked with Dr. Harvey Kliman, director of the reproductive and placental research unit at the Yale University School of Medicine, who specializes in the endometrium, to identify women with abnormal endometrial development by examining the expression of nuclear cyclin E, or nCyclinE.

Women with abnormal levels of nCyclinE, a molecular marker for the health of the endometrium, were prescribed progesterone during the second half of their menstrual cycle, when the uterine lining matures in preparation for a possible pregnancy.

The researchers found that natural progesterone, administered vaginally, led to a higher birth rate. Over two-thirds of pregnancies were successful in women who received progesterone, compared to barely half in women who did not receive the hormone.

“We are very pleased to find that these results reinforce the evidence that progesterone could be a very beneficial, inexpensive and safe treatment for many women with a history of recurrent pregnancy loss,” Stephenson said.

The results are published in Fertility and Sterility, the international journal of the American Society for Reproductive Medicine.

The positive results suggest a prospective randomized trial is needed to validate the findings, Stephenson said. The results also indicate that molecular markers like nCyclinE could help doctors determine which patients would benefit from progesterone, and at what dose.

“I was very pleased that we could work with Dr. Stephenson on this important project,” said Kliman, who is the inventor of the patented test for nCyclinE levels used in the study.

“We initially created the Endometrial Function Test to identify women with infertility,” Kliman said. “This study has shown that the EFT can also be an important tool for patients with recurrent pregnancy loss.”

Stephenson suggests that women who have experienced recurrent pregnancy loss should discuss possible progesterone supplementation with their doctor, but she strongly recommends “a thorough evaluation of known factors associated with pregnancy loss” before making a treatment decision.

Other co-authors on the study are Dr. Dana McQueen of UIC and Dr. Michelle Winter of the University of Chicago.