Clinicians and patients often struggle to find the right treatment for anxiety, sometimes cycling through various therapies for months before the patient begins to feel their symptoms improve.

Now, researchers at the University of Illinois at Chicago have found that a brief test that can be performed in the office can help determine whether an antidepressant or a form of talk therapy, called cognitive behavioral therapy or CBT, would be better at relieving symptoms of anxiety in individual patients. Their findings are reported in the journal Neuropsychopharmacology. 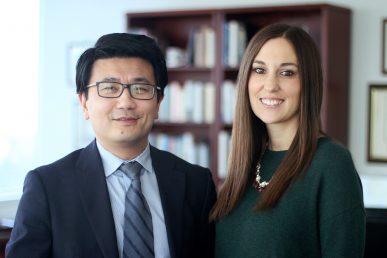 Selective serotonin reuptake inhibitors (SSRIs) and CBT are two often-used, first-line treatment options for anxiety. SSRIs are believed to relieve anxiety symptoms by modifying the transmission of serotonin in the brain. CBT helps patients modify dysfunctional thoughts and behaviors and encourages them to develop new cognitive and behavioral techniques to manage mood and anxiety symptoms. Both are generally and equally effective for treating anxiety, but who responds to one versus the other remains a mystery. In previous research, Stephanie Gorka, assistant professor of psychiatry in the UIC College of Medicine and lead author on the paper, showed that higher electrical activity in the brain in response to committing an error – known as error-related negativity or ERN – was associated with greater symptoms of anxiety.

“People with anxiety disorders tend to show an exaggerated neural response to their own mistakes,” said Gorka. “This is a biological internal alarm that tells you that you’ve made a mistake and that you should modify your behavior to prevent making the same mistake again. It is useful in helping people adapt, but for those with anxiety, this alarm is much, much louder.”

ERN can be measured using electroencephalography, or EEG, which records electrical signals from the brain through the scalp. A cap embedded with electrodes can pick up these signals. A larger ERN signal reflects an enhanced brain response when a mistake is made.

To elicit errors, participants in Gorka’s study wore an EEG cap while they performed a task that required them to quickly and accurately indicate the direction of a center arrow embedded within a string of arrows on a computer screen. A new screen would appear each time the participant indicated the direction of the center arrow using a button. “The task is a bit harder than it sounds and the pace picks up, which inevitably leads to mistakes,” Gorka said.

“We found that ERN can help predict which patients will achieve better outcomes with cognitive behavioral therapy, and that information is very useful because that CBT is a time-intensive, less-available resource and because SSRIs can be associated with side effects, it’s good to know that a patient will do better on CBT to reduce the exposure to potential side effects,” Gorka said.

“Using EEG to measure ERN before deciding on a treatment give us a simple and objective way to help more people get the right treatment the first time around,” said Dr. K. Luan Phan, professor of psychiatry in the UIC College of Medicine and a senior author on the paper. “Patients tend to leave treatment when the first attempt fails to reduce their symptoms. Once people drop out, we lose the opportunity to take care of them, and ultimately these patients continue to suffer from their anxiety,” continued Phan, who holds the University of Illinois Center on Depression and Resilience Professorship.

Gorka thinks that participants with enhanced ERN do better with CBT because they respond well to the structured learning that occurs in the context of individual therapy. “CBT is all about learning new techniques for reducing anxiety and learning to reframe overly negative ideas or feelings. People highly attuned to their own behavior, as evidenced by their enhanced ERN, might just be more receptive and attentive to the lessons learned through CBT,” she said.

The total time for set up and arrow task completion is less than 30 minutes, and because EEG equipment is relatively cheap, portable and available, Gorka thinks that it can be easily incorporated into practitioners’ office settings and decision-making process when it comes to determining treatment.

This research was supported by grant R01 MH101497 from the National Institute of Mental Health and by grant UL1RR029879 from the University of Illinois at Chicago Center for Clinical and Translational Sciences.