The number of cases of progressive massive fibrosis, the most severe form of black lung disease, has been increasing dramatically among coal workers and especially younger workers in central Appalachia. These new findings represent the first-ever documentation of this spike and were presented by Kirsten Almberg, research assistant professor of environmental and occupational health sciences in the University of Illinois at Chicago School of Public Health, at the American Thoracic Society meeting in San Diego on May 22. 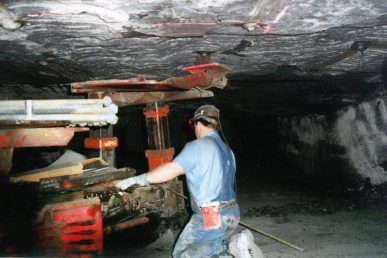 Progressive massive fibrosis (PMF) is a progressive respiratory disease afflicting coal mine workers and caused by inhaling coal dust and other particulates. The incidence of the disease has been declining since the 1970s when legislation went into effect mandating control of dust levels in U.S. coal mines. But recent reports have suggested that the disease is making a comeback.

Almberg and colleagues identified miners with PMF among federal black lung benefits claims from 1970 through 2016.

Of the 314,176 miners filing claims during this time, they identified 4,679 cases of PMF. Over half of those cases were in miners filing after 1996. The researchers found that the proportion of miners applying for black lung benefits with PMF has increased dramatically since 1978, with a significantly accelerated rate of increase since 1996. The highest burden of disease is in the central Appalachian states of Virginia, West Virginia and Kentucky.

Almberg said that several theories have been proposed to explain the resurgent PMF epidemic.

“The miners affected appear to be working in smaller mines that may have less investment in dust reduction systems,” Almberg said. “Due to changes in mining practices over time, mines today may produce higher levels of crystalline silica, which is more damaging to the lungs than coal dust, during coal extraction. And minors appear to be working longer hours and more days per week, leaving less time for their lungs to clear the dust that has been inhaled.”

“More research is needed to determine the causes of this increase in disease, but what is clear is that miners in recent decades have been over-exposed to dust, and ways to reduce these exposures is much-needed,” Almberg said.

Often miners do not file claims while they are still working, and do not participate in medical surveillance or evaluations out of fear that they may have the disease. When they file, they must go through an adversarial claims process, which may not result in compensation for many years. “So, by the time they leave work and get examined, the disease can be quite advanced,” Almberg explained.