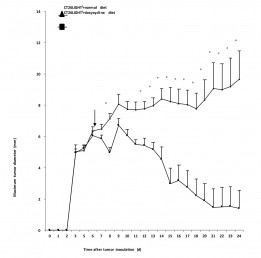 A chemical found in tumors may help stop tumor growth, according to a new study.

Researchers at the University of Illinois at Chicago report that increasing expression of a chemical cytokine called LIGHT in mice with colon cancer activated the immune system’s natural cancer-killing T-cells and caused primary tumors and metastatic tumors in the liver to shrink.

LIGHT is an immune-stimulating chemical messenger previously found to have low levels of expression in patients with colon cancer metastases.

The results are published in Cancer Research.

Colon cancer is the second-leading cause of cancer-related death in the U.S. and, despite advances in treatment, long-term survival of patients with liver metastases is rare.

“For most patients with colon cancer that has spread to the liver, current treatments are palliative and not curative,” says Dr. Ajay Maker, associate professor of surgery in the UIC College of Medicine and corresponding author on the paper. “And while studies have suggested that immunotherapy may be a promising approach for advanced cancers, the use of such treatments for advanced gastrointestinal metastases have not yet been very successful.”

Maker, a surgical oncologist, says that this study is exciting because it looks at an immunotherapy intervention for a previously unresponsive gastrointestinal cancer. The intervention, he says, essentially trains the immune system to recognize and attack the tumor, and to protect against additional tumor formation—a significant issue in colon cancer.

Maker and his colleagues established colon cancer tumors in a mouse model, in which the animals had an intact and unedited immune system. Once tumors were sizable, the mice were randomized into two groups—one group had the cytokine LIGHT turned on in the tumors, and the other served as a control group for comparison.

Tumors exposed to LIGHT showed an influx of T-cells that resulted in rapid and sustained diminishment in size, even after expression of the cytokine stopped. In mice with liver metastases, expression of LIGHT similarly provoked a potent immune response that resulted in a significant decrease in tumor burden.

“We demonstrated that delivery of a therapeutic immune-stimulating cytokine caused T-cells to traffic to tumors and to become activated tumor-killing cells,” Maker said. “This activity is especially exciting because it resulted in a profound anti-tumor immune response without any other chemotherapy or intervention. The treatment manipulates our natural defenses to fight off the tumor in the same way it has been trained to attack other foreign invaders in our body.”

“Not only did we find that LIGHT expression promoted tumor regression, upon further study we also identified the specific type of T-cell — CD8 — that was responsible for shrinking the tumor,” Maker said. “These findings are powerful and have great clinical potential.”