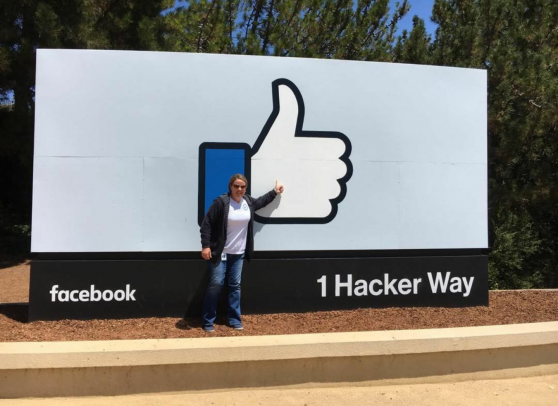 Doctoral candidate Stacy Blasiola accepted a job with Facebook after interning at the California-based company this summer.

Stacy Blasiola’s preparation for job interviews may be unorthodox, but it yielded results with the most-used social media platform.

The Ph.D. candidate in communication needed a way to relax before interviewing for an internship with Facebook, so she summoned the force.

“I was really nervous,” Blasiola said. “I love to play Star Wars Battlefront, so I was playing that like 10 minutes before to calm myself down.”

After three rounds of competitive interviews, Facebook hired Blasiola as a UX research intern in Menlo Park, California. Her duties included creating studies and conducting research that helped designers build products based on what users need.

“The pinnacle of social media is Facebook,” Blasiola said. “To be able to go there and see how they work was really interesting.”

Blasiola, who also teaches a media studies course at University of Wisconsin-Milwaukee, must have made an impression because Facebook offered her a full-time position. She accepted and is set to start in September 2017, after completing her doctoral program.

“She’s a self-starter,” said Zizi Papacharissi, professor and head of communication at UIC. “She listens and seeks advice, but she’s got a lot of energy and doesn’t just wait around. She gets things going.”

After giving a talk at Facebook last year, Papacharissi was asked if she had any students who would be a good fit for the environment. Papacharissi recommended that Blasiola compete for the position.

“Stacy is one of those people who’s a bit of a chameleon,” said Papacharissi, who is also Blasiola’s dissertation adviser. “She can adapt to different places and works well in a diverse environment.”

Papacharissi won’t take credit for any of Blasiola’s success, though.

“I’m very proud of Stacy,” she said. “I just opened the door. She walked through it and walked well by herself.”

While Facebook’s place at the top of the social media food chain may intimidate some, Blasiola is excited to leave such a wide-ranging mark on society.

“When you go into work thinking, ‘We’re going to make a change that affects 1.7 billion people,’ that’s a really amazing feeling,” Blasiola said.