Researchers from the University of Illinois at Chicago have identified a molecular switch that converts skin cells into cells that make up blood vessels, which could ultimately be used to repair damaged vessels in patients with heart disease or to engineer new vasculature in the lab. The technique, which boosts levels of an enzyme that keeps cells young, may also circumvent the usual aging that cells undergo during the culturing process. Their findings are reported in the journal Circulation. 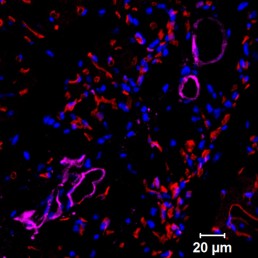 Scientists have many ways to convert one type of cell into another. One technique involves turning a mature cell into a “pluripotent” stem cell — one that has the ability to become any type of cell — and then using chemical cocktails to coax it into maturing into the desired cell type. Other methods reprogram a cell so that it directly assumes a new identity, bypassing the stem-cell state.

In the last few years, scientists have begun to explore another method, a middle way, that can turn back the clock on skin cells so that they lose some of their mature cell identity and become more stem-like.

“They don’t revert all the way back to a pluripotent stem cell, but instead turn into intermediate progenitor cells,” says Dr. Jalees Rehman, associate professor of medicine and pharmacology at UIC, who led the team of researchers. Progenitor cells can be grown in large quantities sufficient for regenerative therapies. And unlike pluripotent stem cells, progenitor cells can only differentiate into a few different cell types. Rehman calls this method to produce new cells “partial de-differentiation.”

Other groups have used this technique to produce progenitor cells that become blood vessel cells. But until now, researchers had not fully understood how the method worked, Rehman said.

“Without understanding the molecular processes, it is difficult for us to control or enhance the process in order to efficiently build new blood vessels,” he said.

His group discovered that the progenitors could be converted into blood vessel cells or into red blood cells, depending on the level of a gene transcription factor called SOX17.

The researchers measured the levels of several genes important for blood vessel formation. They saw that as progenitor cells were differentiating into blood vessel cells, levels of the transcription factor SOX17 became elevated.

When they increased levels of SOX17 even more in the progenitor cells, they saw that differentiation into blood vessel cells was enhanced about five-fold. When they suppressed SOX17, the progenitor cells produced fewer endothelial cells and instead generated red blood cells.

“It makes a lot of sense that SOX17 is involved because it is abundant in developing embryos when blood vessels are forming,” Rehman said.

When the researchers embedded the human progenitor cells into a gel and implanted the gels in mice, the cells organized into functional human blood vessels. Skin cells that had not undergone a conversion did not form blood vessels when similarly implanted.

When they implanted the progenitor cells into mice that had sustained heart damage from a heart attack, the implanted cells formed functional human blood vessels in the mouse hearts — and even connected with existing mouse blood vessels to significantly improve heart function.

The human adult skin cells used by Rehman’s team can easily be obtained by a simple skin biopsy.

“This means that one could generate patient-specific blood vessels or red blood cells for any individual person,” Rehman said. Using such personalized cells reduces the risk of rejection, he said, because the implanted blood vessels would have the same genetic makeup as the recipient.

Rehman and his colleagues noticed something else about the progenitor cells – they had elevated levels of telomerase – the “anti-aging” enzyme that adds a cap, or telomere, to the ends of chromosomes. As the caps wear away a little bit each time a cell divides, they are believed to contribute to aging in cells, whether in the body or growing in culture in the laboratory.

“The increase in telomerase we see in the progenitor cells could be an added benefit of using this partial de-differentiation technique for the production of new blood vessels for patients with cardiac disease, especially for older patients,” Rehman said. “Their cells may already have shortened telomeres due to their advanced age. The process of converting and expanding these cells in the lab could make them age even further and impair their long-term function. But if the cells have elevated levels of telomerase, the cells are at lower risk of premature aging.”

While telomerase has benefits, the enzyme is also found in extremely high levels in cancer cells, where it keeps cell division in overdrive.

“We were concerned about the risk of tumor formation,” Rehman said, but the researchers didn’t observe any in these experiments. “But to truly determine the efficacy and safety of these cells for humans, one needs to study them over even longer time periods in larger animals.”

Dr. Lianghui Zhang, Ankit Jambusaria, Dr. Zhigang Hong, Glenn Marsboom, Peter Toth and Asrar Malik of the UIC College of Medicine, and Brittney-Shea Herbert of the Indiana University School of Medicine are co-authors on the paper.