Mohanraj is the author of 12 books, including the Sri Lankan-American novel Bodies in Motion, which was a finalist for the Asian American Book Awards and has been translated into six languages.

Pugh is an award-winning poet with four full-length books of poems, including Perception, which was named one of the top poetry books of 2017 by the Chicago Review of Books. 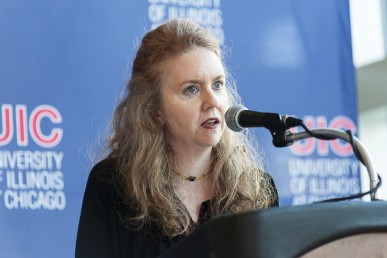 As part of the celebrated writers group, Mohanraj and Pugh will be seated at tables with attendees to give them the opportunity to discuss their work and creative process over dinner.

In addition, author and poet Erika L. Sanchez, a 2006 UIC graduate in English (creative writing concentration) and former Honors College member, will receive the 21st Century Award presented for recent achievements by a Chicago writer. Her bestselling debut novel, I Am Not Your Perfect Mexican Daughter, was named a 2017 finalist for the National Book Award for young people’s literature.