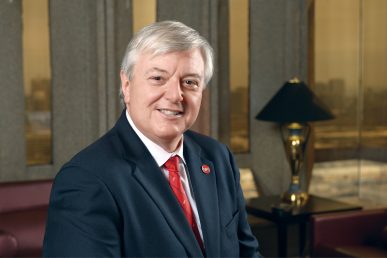 Michael D. Amiridis, Chancellor of the University of Illinois at Chicago, has been elected to the governing board of the Hispanic Association of Colleges and Universities (HACU), a nonprofit organization whose mission is to promote Hispanic student success in higher education.

Amiridis, who has led the UIC campus since March 2015, was one of three new members elected to a three-year term on the 18-member board during the group’s annual conference last month in San Diego. Candidates are nominated by the governing board and elected by the membership in recognition of a longstanding commitment to the association and support of its programs.

The association represents more than 400 higher education institutions, both universities and community colleges, which together enroll two-thirds of all Hispanics in higher education. The group’s international membership includes approximately 45 universities from Latin America and Spain.

“It’s an honor to join HACU’s governing board and I look forward to working with its dedicated group of educators to further advance opportunities in higher education for Latinx students,” Amiridis said. “This appointment is a credit to UIC’s commitment to diversity and our campus mission centered on the principles of access and inclusion for all students.”

As UIC’s chancellor, Amiridis heads one of the nation’s most diverse public research universities, with no ethnic majority among its 30,000 students.

Latino/a undergraduate enrollment in 2017 exceeded 32 percent at UIC, Chicago’s largest university. The number of Hispanic students in the freshman class increased to 1,622, making up nearly 40 percent of the total.

Last year, UIC received a five-year, $5.3 million grant from the U.S. Department of Education affirming the designation of the university as a Hispanic-Serving Institution. The grant supports UIC’s efforts to increase the number of Latino/a and low-income students attaining degrees in STEM fields.

UIC is a two-time recipient (2014, 2016) of the Higher Education Excellence in Diversity Award, a national honor from INSIGHT Into Diversity magazine recognizing U.S. colleges and universities that demonstrate an outstanding commitment to diversity and inclusion. Furthermore, in 2014, UIC’s Latin American Recruitment and Educational Services (LARES) program was named the nation’s top program for increasing achievement for Latino/a undergraduate students by Excelencia in Education, a national nonprofit.