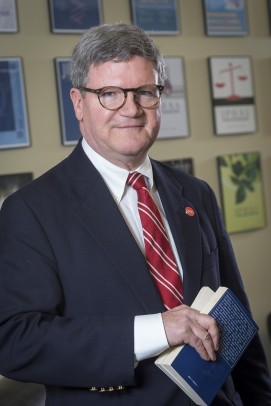 Ralph Keen, UIC professor of history, chair of Catholic studies, and dean of the Honors College.

University of Illinois at Chicago religious scholar Ralph Keen has been chosen as president-elect of the American Society of Church History.

Founded in 1888, the scholarly organization of over 1,500 members promotes the study of the history of Christianity and its connection to culture.

Keen, professor of history and Arthur J. Schmitt chair of Catholic studies, was named to the president-elect post during the organization’s January meeting in Denver. He will serve a one-year term in 2018.

Keen, who is also dean of the UIC Honors College, is a noted historian of early modern Europe. His research has included studies of early-modern religious controversy, medieval and reformation church history, and religious and social thought.

His authored books include, “Divine and Human Authority in Reformation Thought and Exile” and “Restoration in Jewish Thought,” and a textbook, “The Christian Tradition.” He has also edited and translated five other books.

Keen is co-editor of the book series “Catholic Christendom 1300-1700,” and a member of the editorial board of another monograph series, “Studies in Early Modern Religious Reforms, Culture and Society.” He is a frequent presenter at international conferences.

Prior to joining UIC in 2010, he taught at the University of Iowa, Harvard Divinity School and Alaska Pacific University.

Keen received a bachelor’s degree in Greek studies from Columbia University. He earned a master’s in classics from Yale University and his Ph.D. in the history of Christianity from the University of Chicago.