UIC’s mission: To model life on Saturn’s moon in the lab

The University of Illinois at Chicago has received a $1.1 million, five-year grant from NASA’s Astrobiology Institute to identify biosignatures of life on Titan — Saturn’s largest moon — from either currently living or long-extinct life. Titan’s ocean, which sits below a thick ice layer, is believed to have conditions favorable to life.

The project, led by researchers in UIC’s department of earth and environmental sciences, is one of several national research initiatives focused on answering key questions related to the astrobiology of our solar system: what do other habitable environments look like, what kinds of organisms might have lived in these environments, and what biosignatures — chemical or molecular “fossils” indicative of current or previous life — should we look for? 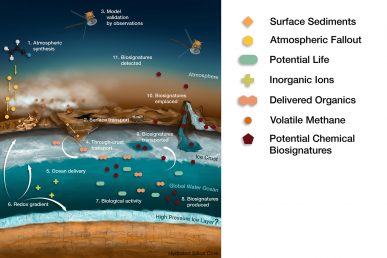 A schematic drawing shows where life could have evolved on Titan. (Image: Athanasios Karagiotas and Theoni Shalamberidze)

Until the NASA Cassini mission — which in 2005 sent a small spacecraft on several data-collecting flybys of Titan before it landed on the moon’s surface, where it collected and transmitted data back to Earth — little was known about Titan except that it had a hazy, nitrogen-rich atmosphere. Cassini revealed that Titan has seas of liquid methane and ethane, replenished by rain from hydrocarbon clouds. The mission also provided evidence that Titan has an ocean made up of water beneath a global water ice sheet that is estimated to be as much as 80 kilometers thick.

Life on Titan would have to exist under extremely harsh conditions. This project considers the potential for life in Titan’s ocean, where the temperature ranges from -20 to 10 degrees Celsius and pressures reach 2,000 to 8,000 atmospheres, up to eight times the pressure measured under 11 km of seawater at the deepest point of Earth’s ocean.

“The essential chemical building blocks for life are present in the atmosphere, but Titan’s surface is quite inhospitable to life as we know it because of its extremely low temperature, ‑180 C and the absence of liquid water,” said Fabien Kenig, professor of earth and environmental sciences at UIC and one of the principal investigators on the grant.

“We believe life on Titan would have formed using atmospheric chemical building blocks that entered the oceans through processes like convection or interactions of liquid water with the moon’s rocky core. The ocean and the ocean floor are much more habitable, supportive environments for life than Titan’s frigid surface.” 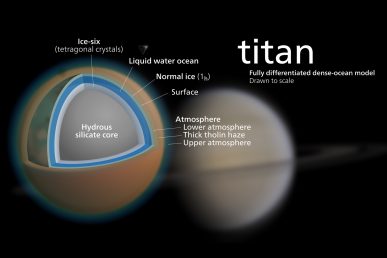 Diagram of the internal structure of Titan according to the fully differentiated dense-ocean model. (Illustration: Kelvinsong, from Wikimedia Commons)

“Life on Titan most likely would have inhabited the ocean, where organisms would have given off metabolic waste products and potentially even left fragments,” said D’Arcy Meyer-Dombard, associate professor of earth and environmental sciences at UIC and co-principal investigator on the grant. “Some of these biosignatures would eventually be transported to the ice sheet above, and possibly through the ice sheet back to the surface and possibly the atmosphere by geological processes, but we need to know what signatures to look for.”

The biosignatures would be detected using instruments that could be sent to orbit or land on the surface of Titan in the future.

Meyer-Dombard and Kenig will re-create conditions found in Titan’s ocean in the laboratory, grow microorganisms under these conditions (high pressure, extreme cold), and look for characteristic chemical and biological signatures that could help other researchers detect and identify life, or traces of extinct life forms on Titan and beyond.

To mimic the deep underwater zone where life is believed to have most likely existed if it did, Meyer-Dombard and Kenig will re-create the conditions of Titan’s ocean in the laboratory. To do so they must construct and maintain a growth chamber at approximately -15 C at extremely high pressure. Pressures on Titan are two to eight times higher than previously explored life-supporting environments on Earth. They will use different kinds of microorganisms such as strains of the bacteria Moritella or Archaea, Pyrococcus as model Titan life forms to grow in the chamber, but these organisms will have to be trained to grow at very high pressure. They will also use organisms found in environments on Earth that are “analog” environments to those on Titan.

Because of the intense high pressure and extremely low temperatures, the microorganisms will grow and divide very slowly. The researchers anticipate leaving the microorganisms in the chamber for several years, occasionally — and very carefully — siphoning off a small sample of cells to examine.

“Because of the high pressure, we need to be very careful with this chamber, especially when we are going in to collect samples,” Kenig said.

Kenig and Meyer-Dombard have a few ideas for the design of the growth chamber, which they estimate will be about the size of a ping-pong ball. These kinds of experiments have never been attempted before.

Kenig and Meyer-Dombard believe that the microorganisms they grow in their chamber will exhibit alterations in gene expression as well as membrane morphology and composition.

“The high pressure could cause changes in the cell membrane that enable it to remain fluid and flexible under such high pressure — specifically, the lipids in the membrane could become shortened. If we know what these high-pressure induced changes look like, we can look for them in samples that may be collected one day on Titan or on other similar moons or planets,” Kenig said.