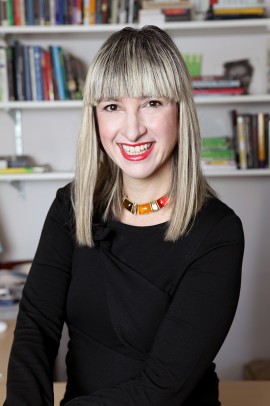 Zizi Papacharissi has studied the internet since the mid-1990s, when it was used by less than 5 percent of the total U.S. population and less than 1 percent globally.

“Everyone at the time thought I was crazy because nobody was looking at the internet and most of my classmates were looking at television and news,” she recalled. “Gradually, the internet became this core medium that supports all these other platforms.”

Her initial research examined what people did online, the users’ personality traits and how their traits influenced their approach to the new medium.

Papacharissi’s work evolved to cover the political and social uses online media technologies, such as whether the internet makes people more or less social, and in what manner it changes how citizens become civically engaged and politically involved.

Her first book, A Private Sphere: Democracy in a Digital Age, examined how online media redefine our understanding of public and private in late-modern democracies and set new parameters for civic engagement.

Her acclaimed 2014 book, Affective Publics: Sentiment, Technology, and Politics, explores online social movements such as the Arab Spring uprisings and Occupy Wall Street, storytelling and news reporting practices via social media, and whether these tools lead to political influence, particularly for underrepresented groups.

Social media are neither positive nor negative nor neutral, but the support they can lend to movements works in a variety of ways, according to Papacharissi.

Papacharissi’s prolific scholarly production over the years, which includes seven edited books and more than 60 authored or co-authored articles and chapters, has established her among the most-cited and influential scholars in the field.

Dubbed “Queen of the Internet” by Glow magazine, she frequently presents at universities around the world and has been a guest speaker at Facebook, Microsoft and Apple.

She is presently working on five edited volumes, due to be published next year, and she also edits two leading scholarly journals, including Social Media and Society, which she founded in 2015.

In 2014, Papacharissi received the High Impact Scholar award for alumni from the School of Journalism at the University of Texas at Austin, where she earned a Ph.D. in political communication and new media.

The future of the communication field and her own research will involve artificial intelligence, robotics, augmented reality and virtual reality, she said.

“There are a lot of fears people have about collaborating with nonhuman agents and those fears are misguided,” she said. “It’s up to us as educators to help people overcome those fears by designing technologies that are more humane.”

The native of Greece has served as head of the communication department since her arrival at UIC in 2008.

“Coming to UIC and this department is one of the best decisions I’ve made in my life,” Papacharissi said. “My colleagues are so forward thinking and the work that they do is so cutting edge that I often think they come from the future.”

“Because we have this focus on emerging technology, we can collaborate with engineering, business and applied health sciences,” she added. “It’s those collaborations that I enjoy extremely and allow us to transcend the boundaries of our own discipline.”