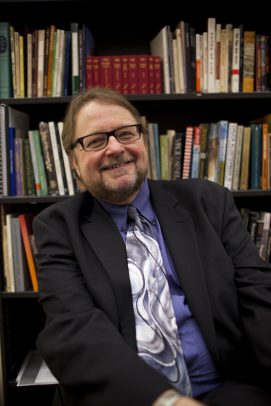 English professor Luis Alberto Urrea is one of eight recipients of a 2017 American Academy of Arts and Letters Award in Literature, which honors exceptional accomplishment in any literary genre.

Urrea, UIC College of Liberal Arts and Sciences distinguished professor, will be presented with the prestigious $10,000 award in New York City next month during the organization’s annual ceremony honoring both established and emerging writers, artists, architects and musicians. Work by Urrea will also be part of an exhibition featuring newly elected members and recipients of honors and awards, which will be on view in the academy’s galleries from May 18 to June 11.

He joins an illustrious group to earn the academy’s recognition in the literature category, including recent winners such as author and journalist Ta-Nehisi Coates, and performer, songwriter and lyricist Lin-Manuel Miranda.

“It is a tremendous honor for which I am deeply grateful,” Urrea said. “Better than the honor, though, is to be selected by personal heroes.”

Urrea, a 2005 Pulitzer Prize finalist for nonfiction and member of the Latino Literature Hall of Fame, was born in Tijuana, Mexico, to a Mexican father and an American mother. The best-selling author has won numerous awards for his poetry, nonfiction, fiction and essays, including an American Book Award for his 1999 memoir Nobody’s Son.

The Water Museum, a 2015 collection of U.S. West- and Southwest-based short stories that, like some of his other best-selling works, reflect Urrea’s personal knowledge and experience of the U.S.-Mexico border culture, was a finalist for the 2016 PEN-Faulkner Award. It was named a best book of the year by The Washington Post, National Public Radio and Kirkus Reviews.

The Devil’s Highway, Urrea’s 2004 nonfiction account of a group of Mexican immigrants lost in the Arizona desert, won the Lannan Literary Award and was a finalist for the Pulitzer Prize and the Pacific Rim Kiriyama Prize.

His novels, The Hummingbird’s Daughter and Queen of America, tell the story of Teresa Urrea, the unofficial Saint of Cabora and Mexico’s Joan of Arc. The former book won the Kiriyama Prize in fiction and, along with The Devil’s Highway, was named a best book of the year by many publications.

Into the Beautiful North, The Devil’s Highway and The Hummingbird’s Daughter have been collectively chosen for more than 30 national, local and collegiate One Book community reading programs.

Into the Beautiful North, Urrea’s “The Magnificent Seven”-inspired novel featuring 19-year old Nayeli, who rounds up fellow Mexican villagers to seek seven good men from across the border to protect their town, is currently the basis for new stage productions and a future series on the TNT cable network.

Urrea, a resident of Naperville, came to UIC in 1999 and teaches creative nonfiction, fiction and poetry workshops for graduate and undergraduate students.

The American Academy of Arts and Letters is an honor society of the country’s leading architects, artists, composers and writers. The organization was established in 1898 to “foster, assist, and sustain an interest in literature, music, and the fine arts.”