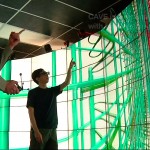 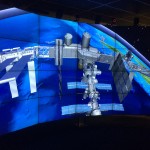 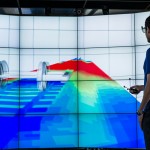 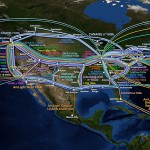 Projects created by other universities and agencies in partnership with the Electronic Visualization Laboratory include (L-R): 3D model of a section of the footing of the San Francisco-Oakland Bay Bridge; simulation of the International Space Station and Space Shuttle Discovery in full scale, orbiting the Earth; virtual train tracks created in the CAVE2 system to observe distortion as high-speed trains roar past; and components of the StarLight high-speed computing network. Photos: Electronic Visualization Laboratory (click on individual images for larger files)

UI LABS, an initiative begun more than two years ago by the University of Illinois drawing on the expertise on its three campuses, has been awarded a $70 million grant from the Department of Defense to create a research center for digital-manufacturing technology.

UIC’s role in the proposal focused on its strengths in computer visualization and technical workforce development.

The Digital Lab will apply cutting-edge mobile, cloud, and high-performance computing technologies to manufacturing challenges — and reduce costs through greater use of technology, from robotics to visualization.

UIC’s strength in computer visualization, as well as its role in creating and continued involvement with “StarLight”, an international research & education communications exchange facility for high-performance networks, is a critical asset for the UIUC/NCSA Blue Waters Peta-scale computing facility to achieve the needed speed links and capacity in the ”digital commons” for the digital manufacturing, said Mitra Dutta, UIC Vice Chancellor for Research.

The workforce-development part of the project, Dutta said, is largely based on UIC’s Learning Sciences Research Institute and Project Lead the Way, an outreach program for high school teachers offered by the UIC department of electrical and computer engineering. Similar programs will be developed as federal agencies push for greater competency in new manufacturing techniques among U.S. workers, she said.

Developed as a way to attract top researchers, UI LABS brings together more than 40 industry partners, and more than 30 academic, government, and community partners, with more than 500 supporting companies and organizations to create the Digital Lab. Leading industry partners include General Electric, Rolls-Royce, Procter & Gamble, Dow, Lockheed Martin, and Siemens. UI LABS raised more than $250 million in additional funds in its bid for the institute, including $16 million from the state of Illinois.

“This is a transformative opportunity to shape the future of American Manufacturing,” said Warren Holtsberg, chairman of UI LABS. “We salute the vision of the president and the confidence the Department of Defense placed in UI LABS to be that change agent.”

“This new Digital Lab has the potential to revolutionize the way the United States approaches manufacturing, and a major effort will be centered in Illinois,” said U.S. Sen. Dick Durbin. “Partners from across the state, including the Quad Cities Manufacturing Laboratory, the Blue Waters Supercomputer at the University of Illinois, Northwestern University, the Illinois Institute of Technology, the University of Chicago, Southern Illinois University, and the city Chicago will be at the forefront of innovative, industry-driven research that will make America more competitive on the global stage. Illinois will undoubtedly benefit from the thousands of jobs created through this research.”

“This solidifies Chicago’s place as the epicenter of the digital manufacturing revolution that will create thousands of jobs here and make our city the place where the greatest 21st century innovations are born,” said Chicago Mayor Rahm Emanuel. “This cutting-edge Digital Lab will ensure that the City of Big Shoulders remains the City of Big Discoveries for years to come.”

“We are grateful for the backing of our many industry and community partners as well as the bipartisan support from federal, state and local officials across the U.S.,” said UI LABS interim executive director Caralynn Nowinski. “We are especially proud of the recognition and collaboration from our incredible university and industry partners who are helping UI LABS realize its vision to be a platform for public-private partnerships that will enhance our nation’s competitiveness.”