Why is asthma worse in black patients?

African Americans may be less responsive to asthma treatment and more likely to die from the condition, in part, because they have a unique type of airway inflammation, according to a study led by researchers at the University of Illinois at Chicago College of Medicine.

Airway inflammation is a key component of asthma, and innovations in treatment are becoming more personalized based on the specific type of airway inflammation in a patient, says Dr. Sharmilee Nyenhuis, assistant professor of medicine at UIC and corresponding author on the study. 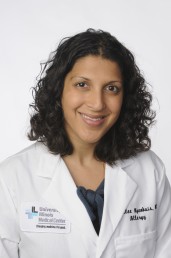 Dr. Sharmilee Nyenhuis, assistant professor of medicine in the division of pulmonary, critical care, sleep and allergy at UIC College of Medicine

“Emerging evidence suggests that differences in airway inflammation can affect a patient’s response to treatment, but whether the patterns of airway inflammation vary across race has, until now, been very unclear,” said Nyenhuis, of UIC’s division of pulmonary, critical care, sleep and allergy.

Black men and women are two to three times more likely than whites to be hospitalized or die from asthma. And while many factors contribute to the burden of asthma in African Americans—such as access to health care and environmental exposures—rates are disproportionate even when social and environmental elements are taken into account.

Nyenhuis and her colleagues performed a secondary analysis of more than 1,000 sputum samples obtained from AsthmaNet, a nationwide clinical research network created by the National Heart Lung and Blood Institute, and the Asthma Clinical Research Network. Samples of the coughed-up fluids were from past clinical trial participants over the age of 12 with mild or moderate persistent asthma and who had not smoked within the last year. The samples were tested for the presence of eosinophils—a type of white blood cell.

The study is one of the largest and most diverse trials conducted in the U.S. on race and asthma, with 26 percent of the patients self-identifying as African American.

Researchers found that black patients were more likely to exhibit eosinophilic airway inflammation than whites, despite taking comparable doses of asthma medication, such as inhaled corticosteroids.

The results are published in the Journal of Allergy and Clinical Immunology.

Co-authors on the paper from UIC include Dr. Jerry Krishnan, associate vice chancellor for population health sciences and professor of pulmonary, critical care, sleep and allergy; and Steven Ackerman, professor of biochemistry and molecular genetics.