Women perform better than men on memory tests for Alzheimer’s

Women do better on verbal memory tests commonly used to diagnose Alzheimer’s disease compared to men with the same amount of neurotoxic protein in their brains, a new study has found. 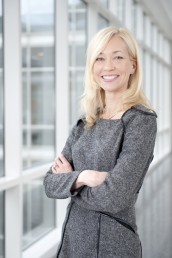 Dr. Pauline Maki, professor of psychiatry and psychology and senior director of research at the Center for Research on Women and Gender at the University of Illinois at Chicago.

It is well known that females have an advantage on verbal memory tests, in which subjects are challenged to recite back a list of heard words. Because women are better at the tests, which are often used to help detect and diagnose Alzheimer’s disease, the severity of their disease may be missed, says Dr. Pauline Maki, professor of psychiatry and psychology at the University of Illinois at Chicago and an author on the study, published in the Journal of Alzheimer’s Disease.

“Women have better verbal memory than men, in general,” said Maki, who is also senior director of research at UIC’s Center for Research on Women and Gender.

“One key factor is their higher levels of estrogen,” she said. “We see this in women whose ovaries are removed – their verbal memory worsens – and when they take estrogen, their memory bounces back. So the advantage women have over men on this test is real, and the issue is that these tests might not detect the early stages of Alzheimer’s disease in women. This is a big problem for women, because the earlier that mild cognitive impairment is diagnosed, the earlier treatment can begin to slow its progression.”

Maki and her colleagues wanted to see if the female advantage on the tests persists at different levels of Alzheimer’s pathology, as measured by amyloid-beta deposition in the brain. Buildup of the toxic protein is thought to be the main driver of the cognitive impairment in Alzheimer’s.

The researchers looked at data from participants in the Alzheimer’s Disease Neuroimaging Initiative, whose brain cortex levels of amyloid beta were measured using positron emission tomography.

They then looked at the verbal memory test scores of these participants, for both immediate recall and delayed recall. They found that among men and women with low to moderate levels of amyloid beta, women had significantly better delayed recall scores. But the difference between the sexes narrowed for those whose amyloid-beta level was high.

Women’s ability to perform well on the tests despite considerable evidence of disease “can also be a sign of resilience in the face of the disease,” Maki said.

“Their brains could be compensating or adapting,” she said, which may also explain the paradox.

Maki thinks there may be a solution to that problem.

“The answer may be to lower the scoring threshold for these tests for women, so that they can pick up more women with early memory issues,” she said.

Co-authors on the study are Erin Sunderman and Dr. Richard Lipton of the University of California, San Diego; Anat Biegon of the State University of New York; Susan Landau of the Albert Einstein College of Medicine; and Lean Rubin of UIC.

Data collection and sharing for this project was funded by the Alzheimer’s Disease Neuroimaging Initaitve through grant U01 AG024904 from the National Institutes of Health. Sundermann’s and Lipton’s time was supported by funding for the Einstein Aging Study: National Institute on Aging Grant AG003949, AG026728, TL1RR000087, T32-GM007288 and the Leonard and Sylvia Marx Foundation.