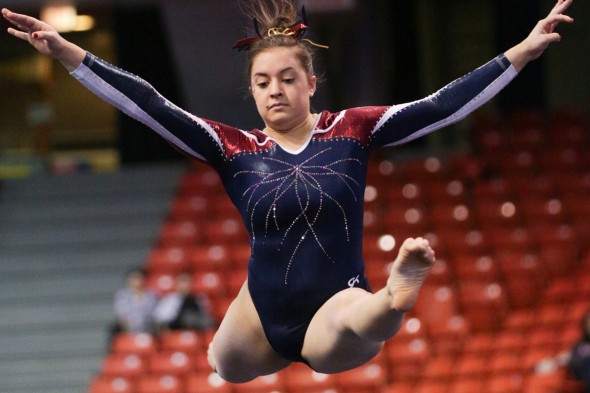 The women’s gymnastics team grabbed a 192.425-192.000 victory against Illinois State Sunday in its first Midwest Independent Conference meet of the season. Mikailla Northern notched her second first-place all-around performance of the season, earning a 38.550.

Riley Cholod had a career-high 9.850 on bars in the first rotation to take the event title. Jenna Squillo and Katie Snyder tied for third, each putting up a 9.700 on the event. Serena Baker tied for fifth with a 9.675.

The Flames moved on to vault, where Squillo took the top spot, earning a 9.700. Northern tied for third with a 9.650. Nikki Woodruff and Riley Mahoney landed in a four-way tie for fifth place, bringing in a 9.625.

UIC took to the floor for the third rotation, where Toni Alicke placed third with a 9.700 as the Flames’ top scorer. Abby Hasanov recorded a 9.650 to take fifth.

“It was fun to get a conference win and see Mikailla get the all-around win,” co-head coach Peter Jansson said. “The girls are fighting hard, making changes week to week, and we’re really looking forward to being home next week.”

UIC hosts its first home dual of the season Sunday versus Eastern Michigan.