2018 Scholar of the Year Yann Robert 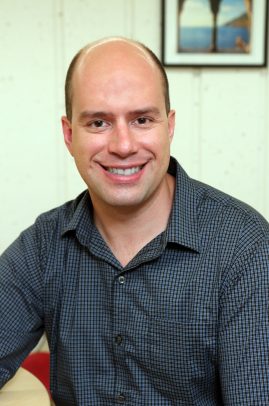 Soon after Yann Robert’s arrival at UIC in 2012, the Newberry Library in Chicago finished digitizing a collection of nearly 40,000 French Revolution pamphlets that chronicle the era’s tumultuous events through opinions expressed by the monarchy’s detractors and defenders.

It was perfect timing for Robert, a scholar of 18th-century French theater, politics and literature, who had just completed an Andrew W. Mellon postdoctoral fellowship in the humanities at Stanford University.

The following year, he was awarded the Mellon Foundation’s prestigious fellowship at the Newberry, where those digitized materials would ultimately transform his analysis of the rise of theatrical trials and judicial plays.

Robert’s resulting book, “Dramatic Justice: Trial by Theater in the Age of the French Revolution,” is considered a pioneering effort that uses a “theatrical lens” to present new histories and interpretations of the era’s key events such as the trial of Louis XVI and the Terror.

“This approach mixing law and literature studies with performance studies gives me a new methodology,” he said.

Up to then, trials were secretive hearings held behind closed doors.

“The suspects and witnesses were questioned separately, everything was transcribed, and the judge would reach a verdict without even necessarily speaking and interrogating the various participants in the trial,” Robert said. “By the end of the 18th century, we moved to the kind of model that we are familiar with today — big public trials, lawyers arguing with each other, cross-examination, all of this before a jury and judge who are supposed to reach a verdict based on a subjective impression. It’s very theatrical, very different.”

Robert seeks to underline the downside of this change.

“The tendency in my field has been to present the shift from this secret private justice to a more modern system as a triumph of enlightenment, liberal values and rights of the accused,” he said. “What I show is that it actually produced a great deal of anxiety that theater was invading the courtroom and that we were losing any sense of truth as an objective value.”

People in the 18th century, but even more so in the present, are aware they are building justice on a competition of potentially fraudulent narratives, he notes.

“I feel like a lot of those anxieties are very present today when we have a lawsuit culture, trial by media, and the sense that justice is often more the result of who is a better performer than of who has the most just case,” he said.

Robert’s early career work, which is characterized by the University of Chicago’s Robert Morrissey as “impeccable research and daring, deeply thought-through analyses,” also includes a critical edition of the Revolutionary play “L’Ami des lois,” 13 articles, four book reviews and numerous presentations at some of the most important conferences in his field.

As founding member of the Newberry Library’s “French Revolution Pamphlets Digital Initiative,” he has led a team of more than 40 students as they research, contextualize and translate the era’s pamphlets over the past three years.

One of the projects he’s most proud of is his graduate-level students’ translation of “The Last Judgement of Kings,” an important government-sponsored Revolutionary play that is now more accessible to non-specialists.

“My hope is that having those types of plays translated might make it possible for historians or future historians to use them in their research and teaching,” he said. “They now have a readily accessible version in English, side-by-side with the French.”

Researchers of the year, Scholar of the Year