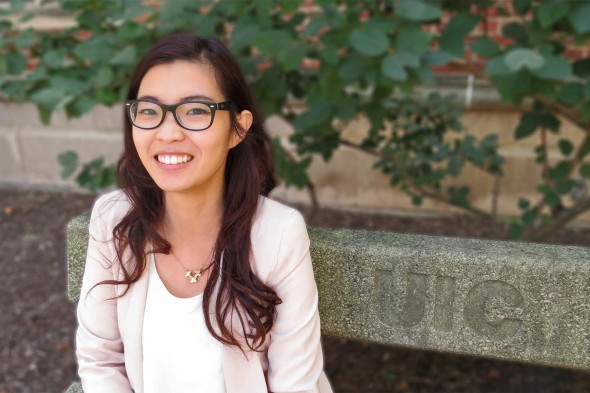 Esther Ng, a second-year master’s degree student in the biomedical and health information sciences program, is the winner of a national competition hosted annually by the National Science Foundation and Popular Science magazine. 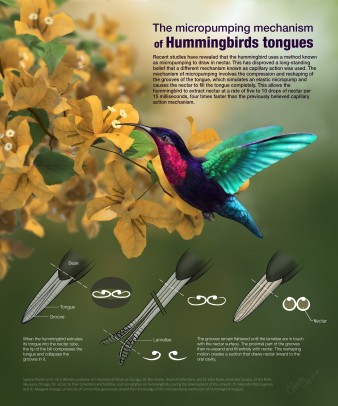 The Vizzies Challenge celebrates the use of visual media to communicate scientific data and research by recognizing the best photographs, videos, illustrations, interactive apps, and posters and graphics produced by academic researchers or artists.

Ng’s poster, “Micropumping Mechanism of Hummingbirds’ Tongues,” was the People’s Choice award in the posters and graphics category. She was one of 10 individuals recognized this year.

Her poster began as a class project. She worked with Chris Whelan, adjunct assistant professor of biologic sciences in the College of Liberal Arts and Sciences, to complete her award-winning project.

“We were asked to create a poster about anatomy or about a mechanism and, because I love birds, talked to a bird expert about this project,” Ng said.

Ng illustrated a hummingbird tongue, which had not been clearly illustrated by researchers or scientists previously.

“Hummingbird tongues are interesting to scientists because their mechanism is unique,” Ng said. “I even went to the Field Museum and looked at a bird under a microscope as part of my research.”

“I’m surprised and very happy I won,” she said. “I couldn’t have done it without Professor Whelan’s help, even though it was not part of his job.”

Ng, who is a graduate of UIC’s biochemistry program, said anyone with an interest in art and science should explore biomedical visualization as a potential career.

“In veterinary school, my interests changed,” she said. “I enrolled in new art classes and when I found out about the biomedical visualization program, it felt right even though I had only ever viewed art as a hobby.”