Cells made by fusing a normal human muscle cell with a muscle cell from a person with  Duchenne muscular dystrophy —a rare but fatal form of muscular dystrophy — were able to significantly improve muscle function when implanted into the muscles of a mouse model of the disease. The findings are reported by researchers from the University of Illinois at Chicago in the Stem Cell Reviews and Reports. 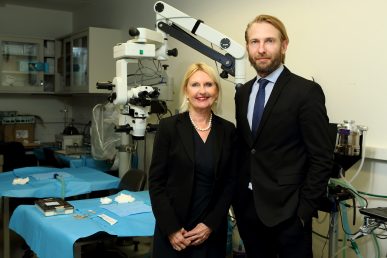 These cells, called “chimeric cells,” are made by combining a normal donor cell containing a functioning copy of the gene for dystrophin — a structural muscle protein lacking in people with Duchenne muscular dystrophy — with a cell from a recipient with the disease. In a January 2018 paper in Stem Cell Reviews and Reports, the researchers used mouse donor and recipient cells to make chimeric cells that boosted dystrophin levels by 37 percent and improved muscle function when implanted into the muscles of a mouse model of Duchenne muscular dystrophy. The new cells had both donor and recipient characteristics and interacted with their surroundings like normal cells. The chimeric cells remained viable and produced dystrophin for 30 days.

“Our results point to the long-term survival of these cells and helps establish the use of chimeric cells as a novel promising potential therapy for patients with Duchenne muscular dystrophy,” Siemionow said. Her team is looking forward to clinical trials in humans in the near future, she said.

People with the disease don’t have the gene for dystrophin, a structural protein that helps keep muscle cells intact. Symptom onset is in early childhood, usually between ages 3 and 5. The disorder causes muscle weakness and loss of motor function and ultimately results in respiratory or cardiac failure and death. With advances in treatment, many with Duchenne muscular dystrophy live into their teens and 20s, and some into their 30s, but there is currently no cure for the disease.

Promising treatments include gene therapy and stem cell therapy, but each has drawbacks. Gene therapy relies on delivering good copies of missing or dysfunctional genes to cells via viruses. Not only can cells become immune to viral infection, rendering the therapy ineffective, but there also is no guarantee that viruses will only infect the intended cells. Stem cell therapy, where cells that contain the dystrophin gene are implanted into a recipient, requires that the recipient take immunosuppressive drugs to prevent rejection.

“This is not conventional stem cell therapy,” said Siemionow, who is the lead author of the paper. “We are restoring dystrophin in such a way that the recipient won’t need to take anti-rejection therapy because the implanted chimeric cells can evade the recipient’s immune system. In traditional stem cell therapy, the implanted cells are 100 percent ‘other’ and anti-rejection medicine is needed in order to prevent the host immune system from destroying those foreign cells.”

In contrast, chimeric cells are 50 percent “self” — with many biochemical and genetic features of the recipient — and as such can trick the recipient’s immune system into ignoring them.

“The chimeric cells are just enough like the recipient’s own cells that their immune system gives them a ‘pass’ so to speak,” Siemionow said.

In the lab, the chimeric cells were seen to express dystrophin.

When the cells were implanted into the leg muscles of a mouse model of Duchenne muscular dystrophy, dystrophin levels rose approximately 20 percent of muscle fibers affected by the implanted cells at 90 days post-implantation, “enough to produce a significant improvement in muscle function,” said Dr. Kris Siemionow, associate professor of orthopedic surgery in the UIC College of Medicine and a co-author on the paper.

Maria and Kris Siemionow, who are mother and son, have recently launched a company to develop their chimeric cells into a therapy to treat Duchenne muscular dystrophy called Dystrogen Therapeutics.

Erzsebet Szilagyi, Dr. Kris Siemionow, Enza Marchese, Ahlke Heydemann and Joanna Cwykiel of the University of Illinois at Chicago, and Jesus Garcia of Saint Louis University, Missouri, are co-authors of the paper.

This work was supported by the UIC Chancellor’s Innovation Fund Proof of Concept Award.