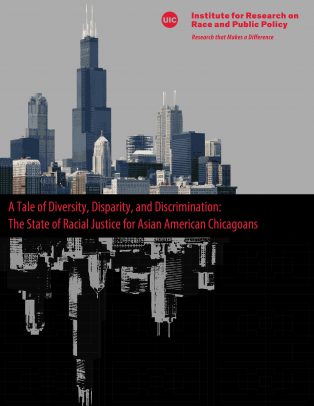 Despite popular stereotypes that Asian-Americans are a “model minority” unaffected by racial discrimination, a new report from University of Illinois at Chicago researchers details the barriers that Chicago’s Asian-Americans face due to racial inequities in housing, education and labor.

“A Tale of Diversity, Disparity, and Discrimination: The State of Racial Justice for Asian American Chicagoans” also highlights major demographic changes in Chicago’s Asian-American community, which is the city’s most diverse and fastest growing racial/ethnic group.

“The findings present multiple ways that the lives of Asian-Americans in Chicago are deeply affected by racial inequity,” said William Scarborough, report co-author and research assistant at the institute. “As the size and influence of this community continues to grow, the report can help inform ongoing discussions on racial equity in the city.”

“By highlighting multiple challenges facing Asian-Americans in Chicago, this report reveals yet another layer of racial inequity in the city, while also serving as a critical document to inform local policy that improves the lives of all Chicago residents,” said co-author Amanda Lewis, director of the institute and professor of African American studies and sociology.

“In shedding light on the challenges Asian-Americans face and amplifying expert perspectives on their experiences, this report provides an invaluable resource to inform not only Metropolitan Family Services, but also organizations across Chicagoland in more effectively providing integrated services to strengthen a key community in our area,” says Ric Estrada, president and CEO of Metropolitan Family Services. “When we empower one community, we’re empowering our entire city.”

Reflecting on the implications of the report in his commentary, Mark Martell, director of UIC’s Asian American Resource and Cultural Center, writes, “This report gives voice to a historically overlooked racial group and provides direction for the overdue dialogue on the needs of Asian-American communities.”

Iván Arenas, associate director for community partnerships in the institute, is also a co-author on the new report that serves as a follow up to the 2017 report, A Tale of Three Cities: The State of Racial Justice in Chicago, which detailed the divergent conditions for blacks, Latinos and whites in the intersecting domains of housing, economics, education, justice and health.