Poor sleep in anxiety, depression may make it harder to see positive

A lack of sleep makes everything harder. Focusing, finishing assignments, and coping with everyday stress can become monumental tasks.

People with anxiety and depression often have sleep problems. But little has been known about whether or how their poor sleep affects a specific region of the brain known to be involved in regulating negative emotional responses. 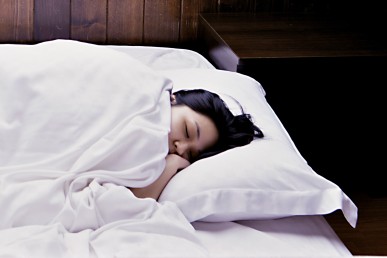 Researchers at the University of Illinois at Chicago College of Medicine have found that this area of the brain, the dorsal anterior cingulate cortex, may have to work harder to modify negative emotional responses in people with poor sleep who have depression or anxiety. The finding is reported in the journal Depression and Anxiety.

The research team, led by Heide Klumpp, assistant professor of psychiatry at UIC, used functional MRI to measure the activity in different regions of the brain as subjects were challenged with an emotion-regulation task. Participants were shown disturbing images of violence — from war or accidents — and were asked to simply look at the images and not to try to control their reaction or to “reappraise” what they saw in a more positive light.

An example of reappraisal would be to see an image of a woman with a badly bruised face and imagine her as an actress in makeup for a role, rather than as a survivor of violence, Klumpp said.

“Reappraisal is something that requires significant mental energy,” she said. “In people with depression or anxiety, reappraisal can be even more difficult, because these disorders are characterized by chronic negativity or negative rumination, which makes seeing the good in things difficult.”

The participants — 78 patients, 18 to 65 years of age, who had been diagnosed with an anxiety disorder, a major depressive disorder, or both — also completed a questionnaire to assess their sleep over the previous month. A motion-sensing device called an actigraph measured their awake time in bed, or “sleep efficiency,” over a six-day period. The questionnaire results indicated that three out of four participants met criteria for significant sleep disturbance, and the actigraph results suggested the majority had insomnia.

Participants who reported poorer sleep on the questionnaire were seen to have less brain activity in the dorsal anterior cingulate cortex during the reappraisal task, while those with lower sleep efficiency based on the actigraph data had higher activity in the DACC.

“Because the questionnaire and actigraph measure different aspects of the sleep experience, it is not surprising that brain activity also differed between these measures,” said Klumpp. “The questionnaire asks about sleep over the previous month, and answers can be impacted by current mood. Plus, respondents may not be able to accurately remember how they slept a month ago. The actigraph objectively measures current sleep, so the results from both measurements may not match.”

“Higher DACC activity in participants with lower levels of sleep efficiency could mean the DACC is working harder to carry out the demanding work of reappraisal,” Klumpp said.

“Our research indicates sleep might play an important role in the ability to regulate negative emotions in people who suffer from anxiety or depression.”

This research was supported by National Institute of Mental Health grants K23MH093679 and R01MH101497, a Brain & Behavior Research Foundation Award, a UIC Campus Research Board award, and UIC Center for Clinical and Translational Research grant UL1RR029879.