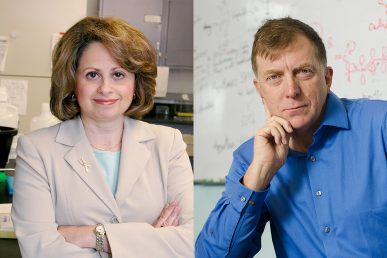 Both drugs are potential treatments for metastatic estrogen receptor positive, or ER+, breast cancer and both were approved for human trials this year.

UIC’s Gregory Thatcher and Debra Tonetti collaborated to develop the drugs, which have been licensed to biopharmaceutical companies.

“Very few research centers can claim to have advanced a drug, not to mention two investigational new drugs, into a clinical trial within the span of a single year,” said Thatcher, the Hans W. Vahlteich Chair of Medicinal Chemistry at the UIC College of Pharmacy.

The most recent of these two drugs to enter a Phase 1/2a clinical trial is named G1T48. It is taken orally and it is categorized as a selective estrogen receptor degrader, or SERD. It works by destroying the estrogen receptor, which is a key part of how ER+ breast cancers grow.

About 70 percent of breast cancer patients have ER+ tumors, said Tonetti, professor of pharmacology in the UIC College of Pharmacy. And while other hormone therapy drugs are used to treat women with this type of cancer, up to 50 percent of these patients have cancers that either do not respond to the treatment or acquire resistance within five years of therapy, she said. When the tumors become resistant, new drugs are needed to keep patients in remission.

Currently, there is no oral SERD on the market. In preclinical trials, G1T48 was demonstrated to be more powerful than the only SERD currently available to patients, called fulvestrant, which is delivered by injection.

Thatcher said that G1 Therapeutics, the company that licenses the drug from UIC, had been interested in licensing a SERD drug, but had not found one that they thought would succeed. However, after reproducing the pre-clinical data for the UIC-developed drug, they decided to invest. “They believed it was the one,” Thatcher said.

TTC-352 is licensed to TTC Oncology. UIC’s Office of Technology Management is overseeing the patents for both drugs, along with a number of other drugs in various stages of development, three of which are for cancer.

“I think the success of these two drugs shows that there is space for academic drug discovery centers to either compete with or complement corporate biopharmaceutical research centers,” said Thatcher. “Academic scientists and centers have a core of knowledge, built up over many years of research, that is unique.”

If the trials for these two ER+ breast cancer drugs are successful, UIC could have its fourth and fifth drugs in the market.