Getting enough of the omega 3 fatty acids DHA and EPA into the brain to study their effects on conditions such as Alzheimer’s and depression — which they have been shown to help — is no easy task. While supplements containing these fatty acids exist, there is scant evidence showing that these supplements actually increase DHA or EPA in the brain. To measurably increase levels of EPA in the brain, a person would have to consume a small glass of it each day, quite possibly with the side effect of smelling like fish.

Now researchers from the University of Illinois at Chicago report that adding a lysophospholipid form of EPA (LPC-EPA) to the diet can increase levels of EPA in the brain 100-fold in mice. The amount of LPC-EPA in the diet required for this increase is rather small for mice — less than a milligram per day. The human equivalent would amount to less than a quarter of a gram per day. They report their results in the Journal of Lipid Research. 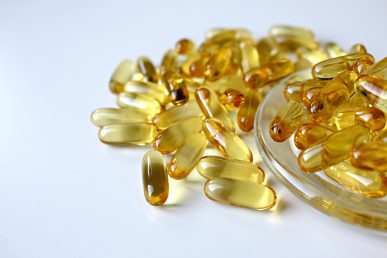 The omega 3 fatty acids DHA and EPA are known to have anti-inflammatory effects and protect against various neurological and metabolic diseases. DHA has been shown to be good for memory and cognitive deficits associated with Alzheimer’s disease, and in pre-clinical studies, EPA has been shown to be effective in treating and preventing depression.

DHA is already prevalent in the brain, and there is little evidence to support the idea that eating lots of fish oil, either through whole fish or supplements, increases levels of DHA in the brain. EPA is found in very low concentrations in the brain. Boosting EPA levels in the brain through consuming EPA has proven difficult because the amount of EPA that would need to be ingested to show increases in brain EPA levels is quite large — 40 to 50 milliliters daily. And researchers still don’t really have a great understanding of how EPA works to reduce depression and how much is needed in the brain to have these anti-depressive effects.

“In order to do the trials to determine the proper dosage and how EPA works in regards to depression, we need to have a better way of getting it into the brain because you need to consume so much of it that its just not practical, at least for human trials,” said Papasani Subbaiah, professor of medicine and biochemistry and molecular genetics in the UIC College of Medicine and corresponding author of the paper.

He reports that providing EPA in the form of lysophospholipid, unlike the type present in fish oil supplements, escapes degradation by pancreatic enzymes which render it unable to pass into the brain.

“It seems that there is a transporter at the blood-brain barrier that EPA must pass through in order to get into the brain, but EPA in fish oil can’t get through, whereas LPC-EPA can,” Subbaiah said. “You don’t have to consume all that much LPC- EPA to have significant increases of EPA show up in the brain, so this could be a way to do rigorous studies on the effects of EPA in humans,” Subbaiah said.

“This study is proof of the concept that we can increase levels of both EPA and DHA in the brain via supplements or by incorporating LPC-EPA in the diet,” said Subbaiah. “Using this technique, we can now perform critical studies to see if increasing concentrations of these fatty acids in the brain can help prevent and treat Alzheimer’s and depression in mouse models, and then move into human trials if results are promising.”

Poorna Yalagala and Dhavamani Sugasini from the University of Illinois at Chicago, along with Kalipada Pahan and Sridevi Dasarathi from Rush University, Chicago, are co-authors on the paper.

This research was supported by a VA Merit Review award I01 BX001090, by grant R21 AT00847 from the National Center for Complementary and Integrative Medicine and by NIH Office of the Director grant S10 OD010660.