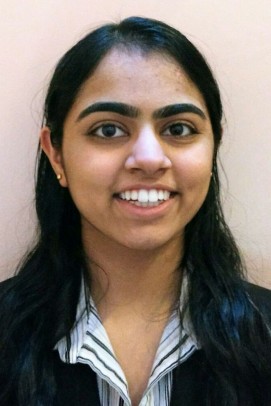 University of Illinois at Chicago Honors College senior Sarita Deshpande is one of 36 American students to win the prestigious Gates Cambridge Scholarship for graduate studies at the University of Cambridge.

Deshpande, who is majoring in bioengineering with a concentration on cellular and tissue engineering, was selected from approximately 800 candidates in the highly competitive selection process, which emphasizes outstanding academic achievement and social leadership. The prestigious scholarship is funded by the Gates Cambridge Trust established by the Bill and Melinda Gates Foundation.

Beginning in October, Deshpande will pursue a master’s degree in medical science in the department of clinical neurosciences at Cambridge’s Lucy Cavendish College.

The Oak Brook, Illinois, resident will study the causes of glaucoma and the mechanisms for cell death.

“Glaucoma is such a prevalent disease, which affects over 70 million people worldwide — and for approximately 10 percent of that population, the disease will progress to its most severe form of glaucoma-induced blindness,” said Deshpande. “If we can better understand these mechanisms, we can potentially develop further treatment options.”

At UIC, Deshpande has been involved in neuroscience and bioengineering research, which spurred her passion to study ocular pathology and pursue a career as a physician-scientist.

Currently she is conducting research at UIC with Xincheng Yao, a Richard and Loan Hill Professor of Bioengineering, on image segmentation and processing for optical coherence tomography angiography, and with Jie Xu, assistant professor of mechanical engineering, on the development of a bioengineered microsystem that is able to mimic physiological cell interactions.

Through the department of bioengineering’s Clinical Immersion Program, she worked with other undergraduates, medical students, physicians, nurses and technicians to conduct a medical device and procedural needs assessment based on observations in hospital and clinical settings.

“This program is especially interesting because it highlights the close relationship between bioengineering and medicine,” she said.

Deshpande is part of UIC’s Guaranteed Professional Program Admissions in medicine. Her advisor in the program is Dr. Rhonna L. Cohen, associate professor in the Center for Molecular Biology of Oral Diseases.

“Sarita has the intellectual fervor and personal qualities to be treasured in one’s students,” Cohen said. “I look forward to her continued successes after Cambridge and the start of her career in medicine.”

Deshpande’s previous awards include the UIC Chancellor’s Student Service and Leadership Award and the College of Engineering’s FMC Award of Excellence. She is a member of Phi Kappa Phi, the nation’s oldest and most selective multidisciplinary collegiate honor society, and Tau Beta Pi, a national engineering honor society.

The 2014 graduate of Hinsdale Central High School is the fourth UIC student to win one of the scholarships since the program was established through a $210 million donation from the Bill and Melinda Gates Foundation in 2000.