Working with graduate and undergraduate students as well as community members in Chicago’s Uptown neighborhood, a new digital research and curricular project led by University of Illinois Chicago professors Anna Guevarra and Gayatri Reddy chronicles almost 200 years of history in the North Side community.

The project, which started in 2017, originally centered on the history of global Asian migrations to Chicago, but as UIC professors Anna Guevarra and Gayatri Reddy did archival research for the project and engaged with community organizers in Uptown, their focus began to shift.

As a result, the project expanded to include the rich, deep and long histories of multiethnic people’s displacements as well as their resistance to such efforts, and subsequent emplacements in Uptown. The project visualizes and narrates these stories, beginning with the displacement of the Potawatomi and other Native communities at the founding of Chicago in 1833, as well as subsequent urban renewal policies over the course of the last century that have led to disputes over land, housing, health care and education.

“This project is dedicated to the people of Uptown who continue to fight, and who have been endlessly generous with their support for this project,” said Guevarra, UIC associate professor and founding director of global Asian studies, and project co-founder.

A key community liaison for one of the projects in the Dis/Placements portfolio has been Emilie Lockridge, who has held various leadership roles for the Winthrop Family Reunion Committee for the past three decades.

Lockridge’s ancestors migrated from Tennessee to Chicago as part of the Great Migration in the 1910s and moved to the 4600 block of North Winthrop Avenue in the 1920s. It was one of the first blocks to be settled by Black residents on the North Side of Chicago, and it also was the only block they were allowed to live on due to an informal race restrictive covenant. She vividly remembers her childhood visiting grandparents on this block every weekend. She moved to Uptown in 1969 where she remained until 1985 when she married and moved to the Chatham neighborhood. 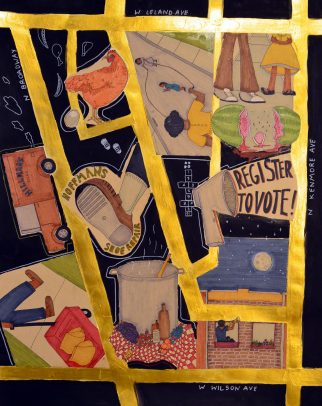 “Go(ld) Down Winthrop Avenue” by Anandita Vidyarthi, intern for “Dis/Placements” project and undergraduate student majoring in interdisciplinary education in the arts with a global Asian studies minor.

Through artwork, storytelling sessions, podcasts and family photographs, the Winthrop Avenue Project illustrates the vibrancy and resilience of Black life on the block while also sharing the story of racial segregation on Chicago’s North Side.

“What I hope people will take away from the project is to understand the uniqueness of our families, although under legal segregated restrictions, we were, and still are, a tight-knit extended family. It’s been a privilege helping to connect family members and those who lived on the block who were not related to us, but were ‘family’ nonetheless,” she said.

Much like what her relatives and the extended Winthrop family did for Lockridge, she hopes the project can help pass along the shared ideals and histories to younger generations.

“Our ability and desire to be able to come together in love and respect for one another is rather uncommon nowadays. The values that our parents and the elders, or seniors who resided on the block, instilled in us, we have carried throughout our lives,” she said.

With graduate students serving as project collaborators, research assistants, and interns and undergraduate students participating via classes taught by the two project founders, Guevarra and Reddy believe the project insightfully captures and represents histories of resistance to state and market-driven forces of urban renewal, as well as the resilience and value of working-class lives and multiracial solidarities in Uptown. The project also showcases the value of truly collaborative research and teaching methodologies, and serves as an important example of the benefits to studying at a top-tier urban public research university.

“We think that it reflects UIC’s strategic priority of community engagement and is a model of how research and teaching intersect powerfully to engage students, faculty and community leaders,” said Reddy, UIC associate professor of gender and women’s studies and anthropology, and project co-founder.

Shilpa Menon joined the project as a research assistant in 2018, just one year after arriving from India to begin graduate studies in anthropology.

“Assisting professors Guevarra and Reddy over these past three years has been transformative to my experience as a migrant to the U.S. Having no background knowledge from being schooled in history in the U.S. made the process very interesting for me,” she said. 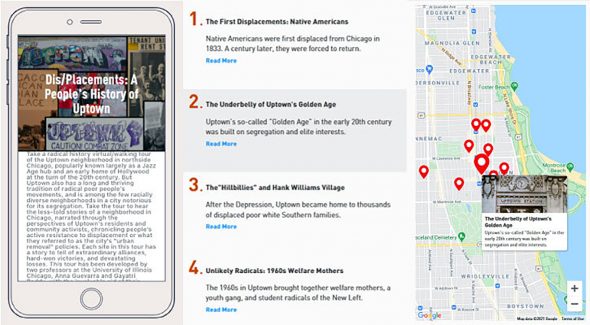 Menon worked primarily on the walking tour, which features 11 sites with unique histories of grassroots resistance to urban renewal efforts in Uptown.

“By tying this history to the American Indian Center, we want to show that Native American communities continue to be a part of urban contexts. An unexpected aspect of this story is that of the Chicago Indian Village, a lesser-known and more radical movement of Native Americans in Uptown. They actually took over federal land in Illinois in the 1970s, demanding their due from the settler government,” she said.

Another walking tour site highlight relates to the Original Rainbow Coalition and is linked to what was once the office of the Young Patriots Organization, or YPO, a gang-turned-community-organization of working-class Appalachian migrant youth. In the late 1960s, the Black Panthers in Chicago led by Fred Hampton, reached out to the YPO and created a political alliance.

Working alongside the Black Panthers, the YPO became vocally antiracist, making the Confederate flag stand for not just Appalachian identity, but the history of slavery and inequality that it signified. The alliance grew stronger when the Young Lords, a group of Puerto Rican radicals fighting against gentrification, joined them to form the Original Rainbow Coalition, according to Menon.

“Today, it seems unlikely that poor white men displaced from rural economies, Black activists, and Puerto Ricans fighting for sovereignty would find common cause, but it is certainly the need of the hour. This tour site features the visions of the coalition leaders, and it is remarkable how profoundly their words speak to us today,” she said.

One assignment, inspired by public art in Uptown, had students write about activism through art.

Cyril Dela Rosa, an urban studies major, wrote about an X-Men mural, which was created by an unknown artist and formerly on display at 4455 North Broadway. It was one of many artistic expressions of support for the Black Lives Matter movement that appeared in Uptown during the summer of 2020.

“The choice of focusing on X-Men was particularly striking to me because I happen to be an on-and-off comic book reader who followed the likes of Storm and the other X-Men through both their movie portrayals and their originally drawn panels,” said Dela Rosa, who is also pursuing minors in global Asian studies and geographic information systems at UIC.

In his essay, he considers the artist’s choice to depict Storm and the X-Men as related to elements of community-building and solidarity, while also representing many different facets of the Uptown neighborhood.

“By coming together as the X-Men, these Mutant superheroes find a community and strength in numbers as students under their teacher – the namesake Professor X. The X-Men were also significant to the world of Marvel as they were introduced as a diverse and inclusive representation of heroes from various backgrounds and identities,” he wrote.

The Dis/Placement project aligns with Rosa’s urban studies interests because he said it unveils the impacts of urban development, gentrification, and displacement, but offers different tools to shed light on these matters: storytelling and oral histories.

“These means of uplifting experiences and stories of those that have come and gone give life, weight, and legacy to the struggles that endure within urban spaces like Uptown. While my urban studies classes often analyze the impacts of urban development through quantitative research or policy creation and implementation, the work of Dis/Placements instills the value of personal connection and collective growth when doing community-focused work,” he said.

Explore “Dis/Placements: A People’s History of Uptown, Chicago” online or via Facebook, Instagram or Twitter. Project organizers welcome the submission of stories or archival material about Uptown for potential use in the project at displacements.chicago@gmail.com. Donors of memories and archival material will be credited on the website.

Support for the project was provided by the UIC Office of the Vice Chancellor for Research Award for Creative Activity in the Fine, Applied and Performing Arts, Humanities and Social Sciences; the University of Illinois Strikeforce Racial Justice Community Research Grant; and the U.S. Department of Education via the UIC Asian American Native American Pacific Islander Serving Institutions (AANAPISI) Initiative.